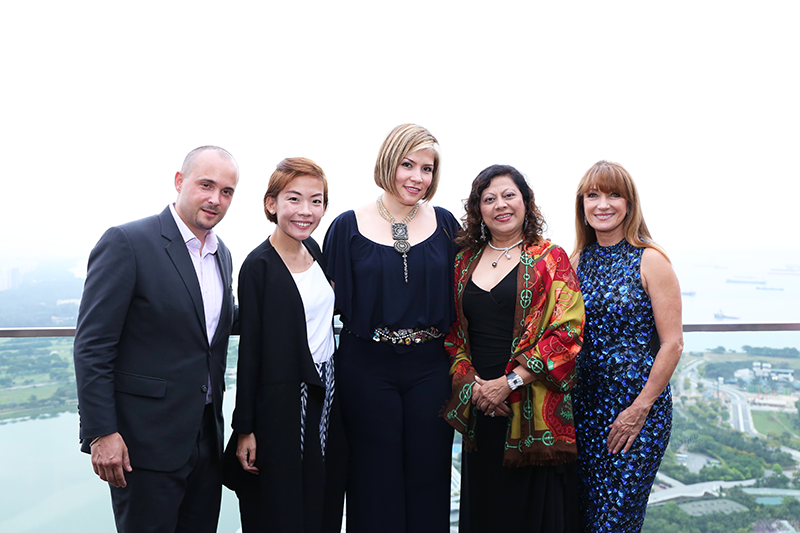 Even though I make movies, I find myself wishing that more of those magic moments could happen in real life.’ – Jane Seymour

Yes, Jane Seymour is more than just a mother of six and a ballerina. Having starred as Bond girl in Live and Let Die, as Queen Marie-Antoinette in La Revolution francaise and an appearance in Young Winston as Winston Churchill’s lover, Jane Seymour OBE, who has an Emmy award, makes her Asian debut as ‘Florence Lancaster’ in The Vortex with the leading production house, British Theatre Playhouse. The show is now on at Jubilee Hall in Raffles Hotel Singapore until May 15. You do not want to miss this!

To celebrate Jane Seymour’s accomplishments in the filming industry, World Of Diamonds Group unveiled ‘The Jane Seymour’ – a prodigious 2.08 carat Fancy Vivid Blue Diamond ring in platinum and plated with rose gold. This fantastic ring has fetched over USD2,000,000 in auctions at Sotheby’s and Christie’s.

‘The impossibly rare gem has been meticulously selected to illustrate the pride of eternity over matter, emotion and knowledge,’ said Karan Tilani, Director of the World Of Diamonds Group.

Read on for the journey of Jane Seymour in Singapore….

The blue diamond ring – The Jane Seymour was presented to the lady herself during a lavish dinner party, serving a customized Modern Asian degustation menu, exclusively designed by Executive Chef Frederic Faucheux at CÉ LA VI Singapore. This rare adamas would retreat to a vault as part of World Of Diamonds’ private collection.

As Karan mentioned, ‘The invitation to behold this creation would rather you not compare The Jane Seymour to anything else in the high jewelry world. It is a celebratory treat, more comparable to a mega-yacht or a ticket to the moon.’

Held at the iconic Raffles Hotel, World Of Diamonds Group was the key supporter of British Theatre Playhouse’s production, The Vortex at the ‘Art for Charity’ gala evening. Seymour received all the limelight from walking down the aisle from the Jubilee Hall Theatre to Raffles Ballroom for a grand dinner – themed ‘Great Gatsby, Red Carpet Glamour’, wearing the Ville de Genève diamond necklace – an 18.18 carat fancy-vivd Pink diamond crafted by World Of Diamonds Group, valued at SGD33,000,000.

Cecelia Leong-Faulkner, Managing Director of the British Theatre Playhouse said, ‘With World Of Diamonds, one of the largest privately held diamond corporations presenting this prestigious gala and honoring Jane Seymour so generously, it simply represents the pinnacle of a palatial lifestyle’.

Hosted by World Of Diamonds, Royal Albatross and Resorts World Sentosa, a 4-course degustation menu by Osia Bar & Restaurant’s Celebrity Chef was set out on a Luxury Tallship Charter Royal Albatross from 12pm to 3.30pm with the display of The Jane Seymour.

Hosted by the World Of Diamonds Group, an exclusive lunch was held in celebration of The Vortex at Angelina, Capitol Piazza. Among those in attendance were society friends including Cheryl Lee, Grace Kong, Ginny Chew, Group Director of World Of Diamonds Karan Tilani, and British-American A-list celebrity Jane Seymour, OBE. While being charmed by the exclusive ambiance of the sophisticated salon, guests indulged in a five-course degustation menu, along with fine G.H. Mumm champagne pairings and Martell Cordon Bleu. Also on display for the afternoon was The Jane Seymour, a 2.08 carat Fancy Vivid Blue celebrity diamond ring crafted by the World Of Diamonds Group for its private collection.

After-Dinner Party. World Of Diamonds Group & 1-Altitude celebrated the tremendous success of British Theatre Playhouse’s production, The Vortex, at the world’s highest al-fresco bar. In attendance were society friends, The Vortex star-studded cast members from London, and including Jane Seymour OBE and her partner, David Green. While guests enjoyed copious amounts of champagne and generous platters of tapas, The Vortex will be the talk of the town for many months to come.